a plea from a mom of many

Thank you!!! for taking an interest in my family and my capabilities as a mother.  It is important for me to remember that I am being scrutinized and evaluated as a capable steward of humanity.  I DO understand that my parenting abilities are paramount to the future of this great civilization. It is a job that is not taken lightly, although curiously, it seems that the test is unjudiciously administered to mothers of many*. (*many – two or more, depending on perception. Most often meant to mean 4+. I don’t really care, mothering is hard 1+, but I digress…)

Today, you witnessed us at our BEST! I think I

even had make-up on…in Home Depot!! My mother would have been so proud.  If I had been in an accident on the way there, the paramedics would have stopped to notice that we were all wearing clean underwear and I had recently shaved my legs.

During the brief spell when you were obviously staring at us while we all waited for our paint to mix, my kids were extolling the virtues of magenta, and discussing the subtle differences between “Sky Blue” and “Blue Sky.”  My older daughters were attending to the needs of my younger progeny.  One paint can finished, one to go…all was going well, and I was relieved! We’re going to make it out of here unscathed!!!! And then…alas…it seems that you were not all that impressed. In fact, you were still carrying a look that can only be described as one who is waiting for a bomb to detonate.

I decided to flash a genuine smile in your direction, to calm you, to invite you to share in my glee, to assure you that I am always aware and concerned about the impact that we have on social situations. But instead, you proceeded to ask me the questions that hurt me the most, and the ones I receive the most often…

It shouldn’t bother me.  My fault, I am a striver by nature, and I care about perception. Maybe it was just a moment of weakness in me.  Maybe I read you wrong and interpreted your interest and tone as anything other than genuinely interested. And in all fairness, you probably don’t understand how it makes my kids and I feel.  Furthermore, I don’t know your story, your experience, or if you even have children of your own.  So, how can I blame you? Long story short…I shouldn’t.  But, if you don’t mind, I’d like to give my perspective…a plea from a mom of many.

1.  YES! My kids are mine.  To ask the question in front of my children plants seeds of doubt in their hearts – that I shouldn’t have them, that they were mistakes, that our family size is unacceptable, that one or some of them shouldn’t…be. Worth noting, what if my kids were adopted, fostered, or we were a blended family?  What does that do in the hearts of parents and their children who are related by love and choice? Please don’t ask this to anyone, ever. Please.

2. Interesting question. In all honesty, I wasn’t really trying at all. Sex is fun and pretty easy actually. Anyone can do it with minimal effort.  Sometimes, it results in a baby.  When it does, the odds are pretty much 50/50 one way or the other.  Do I actually have to explain this to you? I’m sure you aren’t implying – right in front of them – that my daughters were not special or important to me? That they were a disappointment? That their brother is the crown jewel of our family? That my life would be incomplete with a male heir, so I said “let’s just keep poppin’ them out til we get a penis!” Please. I have known of this to happen, so I will let this one slide, but to assume this is why large families exist, because your brother’s, cousin’s, sister’s, aunt’s, best friend had 10 boys before she “finally got that girl!” is what drives the desire to have a larger family – is pretty ridiculous. Please consider rephrasing the question, or consider a statement of fact, “Your son is going to really know how to treat a woman some day.” This is true, and a benefit to his future wife. (You’re welcome, future daughter in law)

3. NO. I understand that “yes” would probably be an easier answer to accept, but my kids are older now and I can’t just lie anymore – even though that used to be so much easier for me too.  At this point, you wanted me to point them out by age and birth order.  This is “oh, so fun” because genetics are unpredictable.  So, again, thank you for pointing out how “small” my eight year old is, and how “big” my 7 year old is, and be sure to make good and certain they carry that as something that is “wrong” with them.  I don’t know how I could have ever figured out that two of my kids have curly/wavy hair, and two have straight hair! HOW DID THIS HAPPEN?????!!!!! Please consider the following instead, “Your girls really favor each other! I would love to know how old everyone is…” Way less intrusive, see the subtle difference?

Well, it was a pleasant interaction we had today.  As we talked, many exasperated parents and their screaming (single) children had happened by buycbdproducts (((cyber hug))) fellow parent, it’s rough, I know.  I guess they get a pass since they aren’t contributing to world overpopulation (Yes, I’ve been told this, too), but I had hoped that by our patient and polite dialogue with you that we might have changed your opinion slightly on large family size. It is unfortunate that instead you left me with this statement of encouragement…”You make me tired just looking at you, and I used to teach High School.” Well, dear friend, let me just say – If that’s because I’m working hard to get it done right, then go take a nap.

P.S.: This is not me at my best. I realize this is a diatribe filled with anger, bitterness, and snark. I was hurt, and I’m still working through it as I learn about “the subtle ways of taking vengeance.”  Let’s just say, that I have been stewing on this, attempting to suppress the hurt, but instead, I am going to try to process it and let go of it.

This reaction is the mama bear in me, and at this point you might think I’m making much ado about “&*!$ strangers say” (I think there’s a YouTube video idea in the making here). But it’s what came next that hurt most of all.  After this exchange, as we all walked to the car, I thanked Haleigh for all of her help in the store and complimented her abilities. She turned to me and said, “I’m only going to have two children – a girl and a boy. I’m not going to end up like you.”  A seed had been planted.  I managed to stifle my pride, my tears, my anger at a stranger I have given too much power to already – and after a few deep breaths and a prayer said in response.  “I know you won’t be like me, Haleigh. In fact, I don’t really want you to try to be like me. If I have anything to do with it, and if all my prayers are answered, you’ll be better than me – you’ll be the person God wants you to be, and I don’t care if you have no kids, or 20.  I am so proud of you.”

I don’t know…I haven’t really figured out what I could have done differently.  I’m not sure if I should even put any more thought into it.  Haters gonna hate, and we should still absolutely respond in love to offense, mainly because we just can’t handle the burden of vengeance.  I think in this case, our best line of defense starts right under our own roof.  Parents, protect your kiddos from doubt. Tell them their worth and value – often.  Protect your family unity.  Know your family values and communicate them to your kids.  Don’t contribute to division in your own house by labeling your children, or comparing them, but be specific in acknowledging their strengths and play to them to build their confidence.  Celebrate what makes them different and unique. Build them up for success – whatever that may look like for them.  Give them a safe place to try…and fail.   In public, let’s encourage each other. Lift up your fellow parents.  Family and parenting are under attack, and division is the strategy…I don’t care your family composition, traditional, blended, single, etc – none is immune.  We fight back with love and affirmation, because we ARE the stewards of the future.  Let’s rise to the occassion shall we?  If we are raising self-assured kids, confident in our love and intentions toward them, there won’t be much room for doubt left. 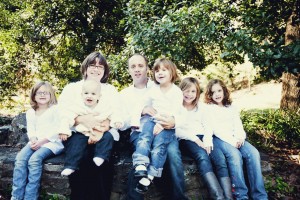 If you ever see this band of slightly frazzled, well intentioned souls on the street, we’d love to hug your neck and encourage you to be the best family you can be. We are not perfect, but that’s why we don’t go out in public very often – just to Home Depot…and Chili’s.

This site uses Akismet to reduce spam. Learn how your comment data is processed.

Enter your name, email address and a message.